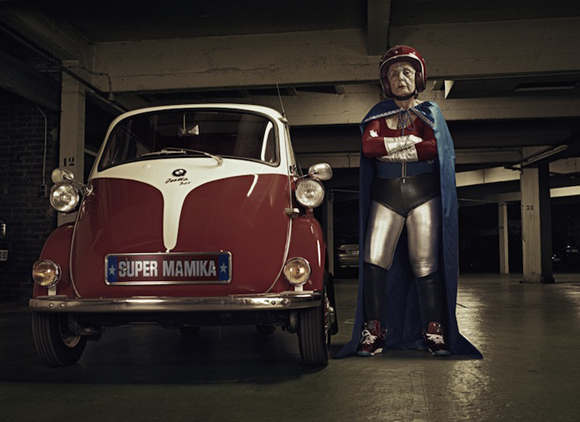 The amazing Sacha Goldberger has totally stunned us with his captivating photographs including this collection of Super Mamika, the wildly entertaining wonder woman! His work never disappoints. Please join us on this beautiful tribute to his father Jean Pierre who passed away ten years ago.

His father was a true gentleman, known for being smooth with the ladies, well dressed and certainly envied by his charm and confident presence. He was one of the finest things to strut out of France. Of course, he loved to eat and drink, spent many days from the thrill of racing cars to the prestige on the golf course with a cigarette in hand, which also happened to be the very thing that would bring him to the grave sooner than we hoped.

Jean Pierre’s very own father stood in the way pursuing his dreams of his passion for art. Truth is, he was incredibly talented.  He drew pictures until the age of 20 when he was forbidden and pushed into applying his energy toward the demands of their family business. It was a devastating blow to accept his father’s disapproval. In his fury, Jean destroyed all of his precious work, never to pick up a pencil to draw again.

Years later, Sacha was born in Paris. Like his father, he grew up enjoying art and design. He credits all his creativity to his father and eventually went on to attend art school.

When he was 21 years old, still in school, they were having drinks talking about this and that, life and ideas. Sacha fiddled with a cork from a bottle of Perrier while they chatted about coming exams, then showing his dad some designs he made and advertising concepts he was working on. The cork made its way to center stage of a very special moment in Sacha’s life when his father looked down at it deformed and curled saying, “look it’s funny, it looks like a mouth, maybe you should make an ad with this”. This sparked a whole chain of events that has led to the kickstart of Sacha’s success.

From there, a simple cork made its way to being the key subject for his project with the text “Perrier fou rire” (Perrier laughter). He received one of the best grades in his class. This ad was a prime piece in his portfolio which allowed him to move his career forward by finding more promising work.  He honors his father with true sincerity, “It was because of him. He gave me this idea as a gift to start in life. I became an art director in the best agency in Paris “clm bbdo” with Phillip Michel. Thank you daddy you made my life.”

As a father you have the power to touch the course of someone’s life in a very powerful way. It is a position that assures girls of the treasure they need to know they are and encourages boys that they are good enough amidst a tough, judgmental world.  In the French countryside, two generations of artists were handled very differently by the one they call father. One story quite unfortunate, the other absolutely beautiful.  Both serve as a sweet reminder that only you can change the patterns from the generation before.