Iconic designs are truly timeless and defy the passage of time to wow even in the most contemporary of interiors. Far from being remnants of a long-gone design era or even historical objects one admires but doesn’t dare to use, celebrated designs remain part of living spaces for a lifetime. Whether it’s the Charles Eames lounge chair, Ludwig Mies Van Der Rohe’s Barcelona Chair, the Louis Poulsen PH 5 series, or Marcel Breuer’s Cesca chairs, these designs become cherished heirlooms but never lose their appeal over time.

In recent years, the Cesca Chair has become more popular than ever. One of the latest  stars of Instagram, this everlasting design has been embraced by a new generation of design lovers. However, not many people know the history of the chair or just how old it really is. All of which make the modern look of the Knoll Cesca Chair even more impressive. Timeless design: the perpetual success of an almost 100-year-old chair.

Designed in 1928 by Marcel Breuer, the Cesca Chair rocked the world of furniture design. A student and then master carpenter at the Bauhaus, Marcel Breuer brought art and industrial design together in iconic furniture pieces and architectural projects. In 1925, he created one of the most iconic Bauhaus chairs and a symbol of modernist design, the Wassily Lounge Chair. Made for Russian painter Wassily Kandinsky, the chair featured a cutting-edge tubular steel frame with leather strips instead of traditional upholstery. Likewise, the Cesca chair that followed used the same tubular steel base.

Named as a tribute to Francesca, Marcel Breuer’s daughter, the design combined a sleek metal frame with a cane seat and backrest – both of them bordered by wooden frames. The cantilevered silhouette transformed the chair into one of the most influential designs of the 20th century. Naturally, it became a part of  permanent collections of renowned museums, including MoMA. 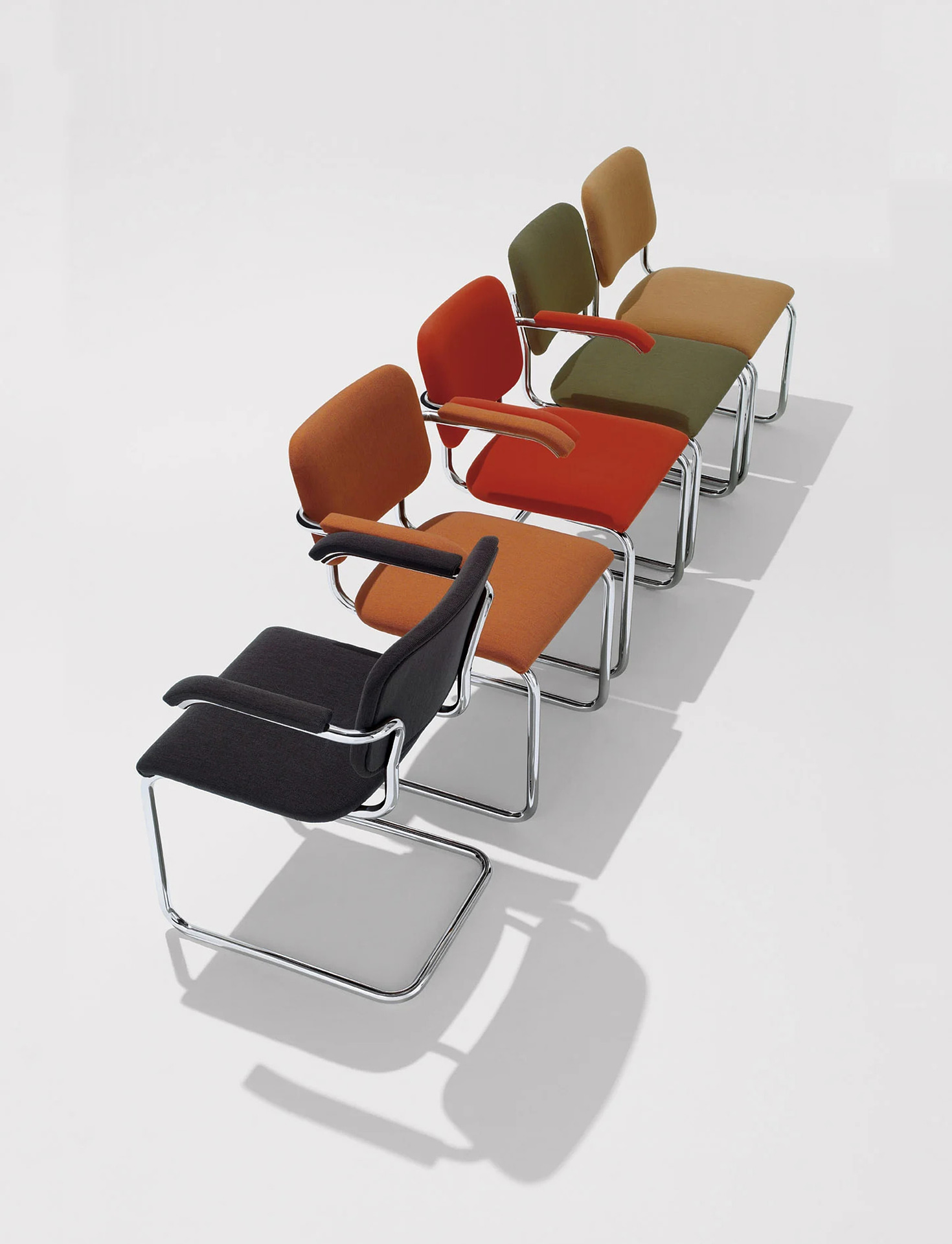 The design embodied Bauhaus principles but also introduced a new element in furniture design. Inspired by the Adler bicycle he rode through the streets of Dessau, Marcel Breuer created the groundbreaking tubular metal frame that would give Wassily and then the Cesca Chair their distinct personality. Lightweight but incredibly sturdy, the tubular steel allowed more flexibility in design. At the same time, the combination of natural cane and metal coupled with the simplicity of the chair ensured that Cesca suited mass-production techniques, even from the late 1920s. In 1968, Knoll acquired the design and is now the only manufacturer that sells licensed Cesca chairs. A beloved chair that seems to be everywhere.

Part of modern homes and now the ubiquitous star of design-focused Instagram feeds,  the Knoll Cesca Chair is the epitome of everlasting design. The chair has also appeared in movies (Pedro Almodóvar is a fan) and in television series. 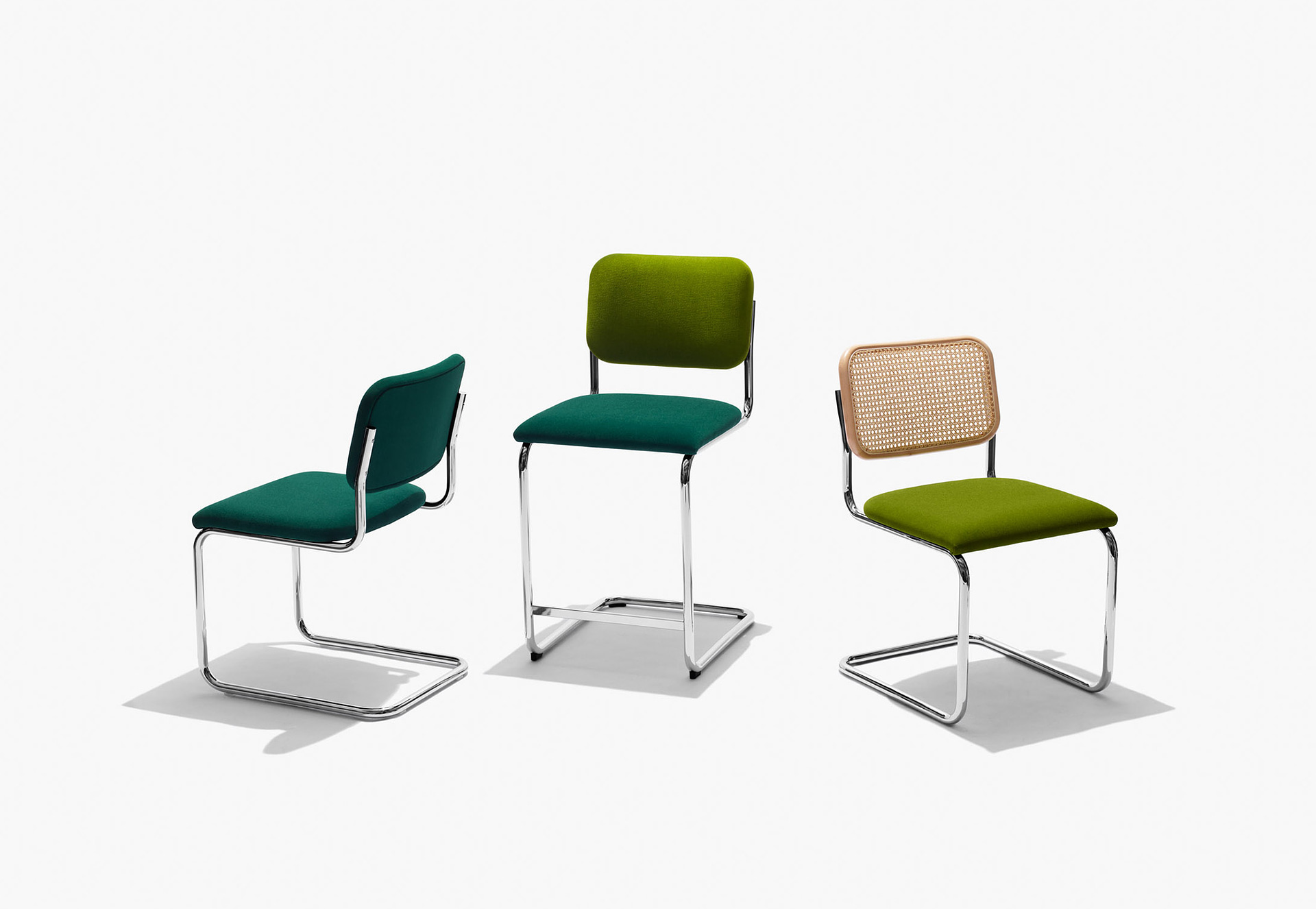 However, because Breuer never patented the design, Cesca chairs have inspired countless similar products. You can find copies at a fraction of the price of an original, but other designs also “borrow” elements of the iconic chair. This has made the prevalence of chairs with rattan backrests and tubular frames more evident, although none of these designs come close to capturing the original’s elegant simplicity and iconic lines. All about the Cesca Chair, at a glance.

If you’re looking to invest into a genuine Breuer Cesca chair, here are the answers to some of the most common questions about the design. Plus, you’ll also discover some interesting facts about one of the world’s most easily recognizable designs.

When was the Cesca chair made?

Renowned designer and architect Marcel Breuer designed Cesca in 1928. The same year, Michael Thonet started production of the B32 chair, as it was first known. At the time, it was the first steel and cane chair to go into large-scale production, which contributed to the early – and lasting – success of the design. In the 1950s, Italian company Dino Gavina took over the manufacturing process. During this time, the chair gained the name of Cesca, which Gavina used with the permission of Marcel Breuer. In 1968, Knoll obtained the production rights and is currently the only licensed retailer of Cesca chairs. What is the term used to describe the Cesca chair?

Nowadays, you may also know the Cesca chair as the Breuer chair. While it originally had the (rather boring) name of B32, the chair got the name “Cesca” when it went into production with Italian company Gavina in the early 1950s. With the designer’s permission, Gavina used the nickname of Cesca, short for Francesca – the name of Marcel Breuer’s daughter. Changing the name of the chair to a short and sweet moniker was a clever branding move that undoubtedly contributed to the chair’s lasting success.

What is the Cesca chair made of?

The original Cesca chair – still in production today – was made from steel, wood, and cane. Knoll offers the design in the same combination of materials, with a tubular steel base that supports a mesh cane seat and backrest framed with beech wood. However, the Cesca series also features other materials like soft upholstery in different colors and patterns. The line includes a wide range of fabrics and materials, including velvet, leather, hand-woven boucle, wool, or the more modern option of plant-based microfiber. How to clean mesh chairs?

Why are mesh chairs so expensive?

Designer mesh chairs and professional office chairs with ergonomic designs are usually more expensive than standard designs. These chairs may have an iconic, patented design or they may provide a range of high-tech features. When it comes to Cesca chairs, original products will always be more expensive than a counterfeit item or a copied design made with low quality materials. Like other designer furniture that has gained a place in the history of design, the Knoll Cesca Chair costs more than an ordinary mesh chair. You can find original Cesca chairs at prices that start at $800-$1,000.